Looking back over the 55 years since I first entered Mexico I can see a lot of change. Change that is good. Change for which I can claim little influence, as I was only in Mexico in 1967 for a few months before I moved on to my assignment in Colombia.

It has been very fascinating to see Mexico this year of 2022 through the filter of old memories. Only the other day I commented to someone that in all the driving we have done in at least six states we have not seen a single accident with injury. I can still remember gory road accidents from 1967 and the horrifying driving that was exhibited. Traffic was noisy, engines loud, and the exhaust fumes black. I am sure the roads are better today and the vehicles are better, but the most noticeable difference is the respect that drivers have for each other.

That is superficial but of more significance is the saturation of evangelical churches found in the most remote out of the way places. God has been building His church and His faithful servants have produced fruit. When we ask about the history of the church in some of these villages we learn that many of them began in the ‘60s and ‘70s when persecution was greatest. Very often they were begun by residents who had gone north for work and then also found the Truth.

I don’t know why the bugs would have changed but I remember being eaten alive by fleas and bedbugs and gnats in the past. Rarely this time did the gnats cause problems. Maybe my hide is tougher or less tasty. I have learned that after a few days the body stops reacting to bites. Contributing to fewer bugs are government programs that have incentivized cement floors for houses, running water, electricity, and roads. Those alone turn many of the adobe clusters from villages to towns. You still see folks ambitiously sweeping the street in front of their house to maintain cleanliness.

I remember “Montezuma’s Revenge” from the past – stomach disorders from eating contaminated food. You would never eat lettuce in a public place back then. That is mostly ignored today and for the most part our team has enjoyed good health and doesn’t give a second thought to what should or should not be eaten.

Even a dog’s life was different in ‘67. Today, every day food scraps are put out on the curb for stray dogs to eat, and there are a lot of them. But people share the sidewalks with them. I noticed businesses here in Oaxaca that put out water for the dogs and I noticed at one business here there is always a trough full of dog food fastened to the outside of the business. I told a Mexican recently what happens to stray dogs in the States. He was shocked and thought we were barbaric and heartless.

Maybe my memory has colored things as worse than they were, but in ‘67 I remember general disrespect for personal property and being paranoid about thieves. The other day I was in a grocery line when someone behind me pointed out a 50-peso bill lying on the floor that had fallen out of my pocket, which I would never noticed that without the thoughtful tip.

Traveling in villages today I notice a huge respect for the property of others. In fact one of the most widely quoted statements from the past is by Benito Juarez which translates like this, “Respect of your neighbor’s rights is peace.” This photo of that quote was taken of a plaque on the street in the town of Itundujia. 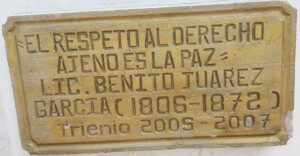 Often doors are left unlocked in the villages. In fact, I realize that I have been enjoying an overall sense of better security here in Mexico than I do in Tucson. To me this speaks of not better laws but of better people. I really think the last 55 years have seen a tangible difference in the conduct of people. If you were to project the future for both America and Mexico I believe the prospects look better for Mexico than (sad to say) my own country. Drugs, crime, and open degeneracy have played a major role in the downward slide of our country and its well-being. The other day I noticed in downtown Oaxaca that the prostitutes were actually more modestly dressed than the American tourists.

By the time this is posted I will be missing the early morning roosters here in Mexico. They aren’t even allowed in most cities and towns in the States. I just want to say thank you to God and to Mexico for displaying redemption at work in people’s lives.