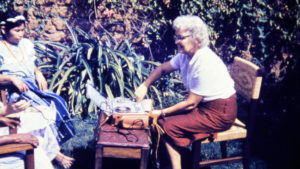 The ministry of Gospel Recordings, now known as Global Recordings Network, was founded in Los Angeles in 1939. Joy Ridderhof returned home ill after a time as a missionary in Honduras. She felt a deep sense of sorrow at having to leave her beloved Honduran village behind, whose people in many cases were unable to read or write and thus relied on a verbal message to introduce them to Christ. If only she could have left behind recorded messages in their native Spanish to continue to nourish their newfound faith!

Thanks to several friends’ generosity, this vision began to come to fruition as she recorded the first Gospel record in Spanish at the end of 1939. Requests for more records started trickling in from Honduras and soon after, requests came flooding in from Honduras and other Spanish-speaking countries in Central and South America, as well. “Spanish Gospel Recordings” was born.

A turning point came in 1940 when Joy was asked to make Gospel recordings for Navajo Indians in the US. (Interestingly, as language helpers, they used some of the “Code Talker” Navajos who had served in the US Army during WWII.) Each additional language recorded would lead to requests for more languages to be served. Joy continued to respond, starting to see this as a fulfilment of the call to take the Gospel to the ends of the earth. Joy’s health improved, and she and others with her began traveling the world and producing recordings in many areas. As they traveled, Joy and her fellow recordists inspired believers in other countries to join them and support this growing global work. First Australia, then the Philippines, then in Asia… centres for the mission, now called simply Gospel Recordings, popped up on many continents.

Within decades, attracted by Joy’s example of faith, prayer, and rejoicing, Christians in many countries were working with her and the growing team in Los Angeles to produce audio recordings of Bible stories. Record presses were maintained in Sydney, India, South Africa, Mexico, and USA. Later cassettes were distributed, then CDs, and now SD cards and social media carry the message. Over time GR’s vision of the Gospel in every language began to set trends in the global mission community. Recognition grew of the need for oral cultures to have access to Christian audio materials.

See the timeline at the beginning of this article for the growth of Gospel Recordings around the world over eight decades. As with every worldwide organization, GR went through phases, communication problems, and a few name changes. But in the early 1990s the original USA office, the next largest centre based in Australia, and most other GR centres and bases formally coalesced and renamed themselves Global Recordings Network, led by GRN International.

With this merge, Global Recordings Network expanded its ministry reach and became known within the mission community as the historic leader in understanding languages and dialects. Today, international ministries all around the world partner with the resources and expertise of Global Recordings Network to fulfill their own callings and enhance their evangelistic and discipleship efforts.

To learn more about GRN’s partners and the important role they have in expanding the reach of our ministry, please follow this link.