The Next Language 16 — Colombia Report

Its hard to believe that over a week has gone by since we left Colombia. I spent Jan 15-30, 2020, in the birth country of my two sons and the country of the discovery of my bride – the feisty Norma Thompson.

How this trip started 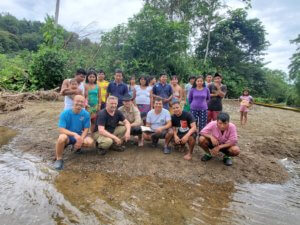 Shall we gather at the river?

We were invited and hosted by the Embena people as we worked to translate the good news into the Embena: Baudo language. It was humbling to live with these simple people who have a burden for their distant relatives in the river adjacent to where they live. These dear people in the headwaters of the Boro Boro River were spiritual grandchildren that came from the very first recordings of the Gospel that reached that language over 50 years ago.

Not only where the Embena hosting me, who they call their pastor, but they were hosting five other young people that were with me for the purpose of learning and participating in the recording process.  Unbeknownst to me, they had invited speakers from four other Embena tribes in hopes that we could make recordings in their languages also.

The days began at 5 in the morning praying in their chapel. The services in the evening were fairly typical church services with preaching, praying for the sick, and even dealing with spirit demonic involvement. At almost every service we saw new converts coming to Christ. One was actually from the Baudo River from the language that we were translating into. It was exciting to be part of this Kingdom activity. 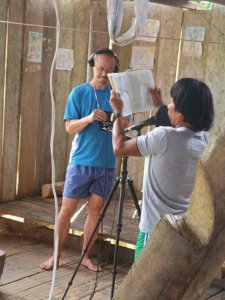 Three others flew with me from San Diego to Bogota. These young people had raised their own funds to cover the expenses of the trip. Seth Vidrio, an engineering graduate student who undoubtedly knows more about digital and computer technology than I ever will, Jeremy Mendenhal, a former pastor who served as our videographer, (Watch Jeremy’s video, “What does a Recordist do at GRN?”)  and Tony Chang, a Chinese-American from Taiwan. (The Embena are very interested in languages and they wanted to hear Chinese – it became an exercise that was very amusing for all as they listened to Tony’s Chinese.)

Once in Bogata, we added Nubia Rojas and her cousin Andrew who acted as Nubia’s chaperone. Andrew is an athletic director in Bogota and he provided a great service by playing football with the children on the opposite end of the village. Nubia has already committed herself to focusing on recording Colombia’s remaining unrecorded languages.

Lastly, Gustavo, a fully trained recordist with GRN, met us in Bogota and worked with us our first two days initiating the training process before joining his family in Ecuador. 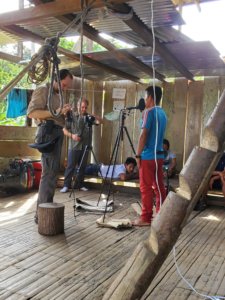 Seth and Jeremy setting up for sound and video

We were able to play the scriptures from the Embena: Northern in Panama that had been translated by New Tribes and SIL. In 2018 I had determined that translation was probably not adequate for these languages but that was based on Embena individuals trying to read and not being familiar with that writing system. What we found was that just based on listening they understand very well what was translated so this opens the entire scripture to these Embena. We ask you to pray that they will have a vision and provisions for flooding about 100 Megavoice players through this whole language area which covers approximately 70,000 people. We left the eight Megavoice players we brought and a bunch of SD cards loaded with the two hours of the new material we recorded. Contact me if you would like to participate in further distribution.

The Assembly of God missionary, Rosenberg, who escorted us through the Boro Boro trip has also found a shorter way to get to the Embena on the Boudo River by going down the coast on the ocean. They can get to a point where the Baudo River comes very close to the ocean and they’re just minutes away from contact versus the three days of torturous trail up the Boro Boro River. They asked us to pray that they would be able to purchase a canoe large enough for the ocean and a motor to go with it.  Something that will probably cost them on the order of $15,000.

P. S. As a “thank you” for your continued support of the ministry of Global Recordings Network USA, and in celebration of over 80 years of God’s faithfulness, we have compiled a collection of 80 daily devotions written by GRN founder, Joy Ridderhof. You may read or download your copy of Rejoice Always – 80 Devotions with Joy Ridderhof here.