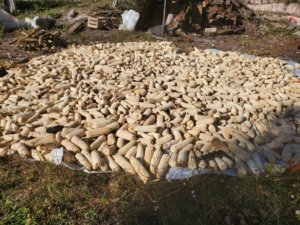 Nothing is more basic to rural indigenous life in Mexico than corn – plain white corn. Farmers there have been careful to preserve the same genetics they have been using for thousands of years. Without corn they would have to buy wheat to make tortillas, and a meal without tortillas is not a meal in Mexico. I believe Mexico has outlawed GMO corn imports to the country even for animal feed.

As a farmer I have noticed a lot that is to be commended in the subsistence lifestyle that revolves around corn. When economies crash or outside food distribution chains get disrupted by things like covid, life in rural Mexico goes on as it has for thousands of years. The word for corn in Nahuatl means “our sustenance.”

According to the Wilson Center statistics, 1.5 million Mexican corn farmers produce 27 million metric tons of corn. In my travels across Mexico I have only seen one commercial corn combine. Most of the 1.5 million corn farmers are growing corn on land that would be considered unusable in the USA. The mechanization we practice would not be possible. Most of the corn in Mexico is planted, weeded, and harvested by hand. 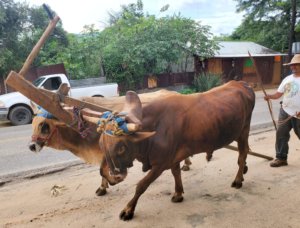 Local pairs of bulls are yoked together to plow hillsides that are difficult to stand on. If OSHA were in charge down here they would probably require parachutes in some of these corn fields.

The corn is grown for the most part for family consumption. Corn for animal feed is actually imported from the US. Most of the farms are dry land farming. Numerous farmers have told me that the advent of commercial fertilizer multiplied production but admit that if the right amount of water doesn’t show up it is a bust because the ground will no longer sustain corn in drought conditions. I have encouraged them to begin incorporating organic practices. The ancient practice (called milpa) of planting corn and beans and squash simultaneously is more sustainable. This is still practiced in some places.

Unfortunately the corn production and active farms are going down every year. Higher-paying outside employment has made it difficult for families to sustain corn production with remaining family members. Studying the hillsides, it is evident that a lot of traditional corn ground is no longer in production. Many of those fields are in terraces that were maintained thousands of years ago by hand.

I respect the fact that Mexico has tried to slow the exodus of corn producers by subsidizing corn at $300 a metric ton. Of course this is no benefit to families that are eating their corn.

So, what does all this have to do with reaching every language in Mexico?

Without sensitivity to the lifestyle in rural Mexico we miss many opportunities to communicate the Gospel. This environment is so similar to the one that Jesus lived and taught in that much of Jesus’ teaching is more understandable to the Mexican villager than it is to us. A typical family, besides the corn, has a mix of animals that includes sheep, goats, donkeys, turkeys, and chickens, with maybe a couple of bulls. Most of those animals live on the corn stalks left after the corn harvest. The house dogs are expected to hunt at night and live on the rats that raid the corn.

We need to respect the fact that just surviving in rural Mexico is a full time job. The American fantasy of Mexicans swinging in a shaded hammock most of the time is something I have not seen — especially in Christian homes. It is humorous that when I excuse myself to take a siesta I apologize that I learned that habit in Mexico 55 years ago.

If we show up to record and expect them to drop everything we are really challenging their economy. On this trip we have offered to help with some of their chores — especially with heavy stuff like corn harvesting. This can give them more time to record with us.

When we show up with a request to record their language and expect them to feed us in the process, we are being unrealistic. So we try to show up with corn and beans and evidence that we are not going to be a burden for very long. We usually offer to pay them if they are housing and feeding us. Sometimes they refuse, willing to do without themselves for the sake of the Gospel. After living with a family and translating and recording and participating in their activities, we always leave feeling enriched and as if we have been part of the family. Americans could learn a lot about Biblical hospitality from these rural Mexicans!