Theirs Is the Kingdom

At last. The final stage of recording the Zapoteco El Alto was as unorthodox as everything else in the process has been.

As promised, Pastor Pablo had asked the elderly speakers to be ready to speak to the unreached Zapotecos in a special service that would be vernacular only and I believe was the first of its kind for these members.

The pastor led with translating the Beatitudes quoted above and then had a few comments comparing their history as the poor, the miserable, the hungry and the merciful — contrasted to the situation they find themselves in today as Spirit-filled sons of the Kingdom. 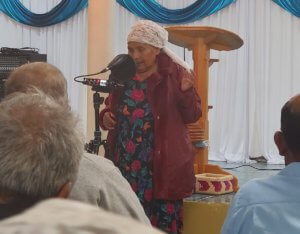 None of this program was planned or organized in our sense of doing things, but God put it together. Nine different speakers stepped up to the microphone and filled in different parts of their history. Some of them were in their 80s. Some were wearing facemasks. All were thankful for the opportunity to tell their story and God’s story in their beloved Zapoteco. One even used an ancient form of speech, and the last was a monolingual woman, heard for the first time in the church.

They grew up sharing stories of when the Spanish first entered, forced them into submission, and established the Catholic Church. Most could remember being punished by the nuns for speaking their vernacular in school. Then they could remember a reversal of policy where they were taught that unless they maintained their language the “missionaries from the north” would come in and steal them from the church.

Then some actually went “north” and learned the truth about the Gospel and found a living power that actually gave them power over alcohol, shamanism, and family abuse. They suffered greatly for their faith when they got back to their home areas with a new lifestyle. Some joined Stephen as martyrs for their faith.

Eventually the town of San Antonino El Alto admitted the reality of the presence of a Protestant church, which has earned its status as citizens along with everyone else. Reportedly 40% of the town is today evangelical. By all appearances the acrimony is over. Believers delivered from the control of the bottle now enjoy an abundance of food and necessities. Bondage and debt imposed by the shaman for healing are today gleefully contrasted with God’s answers to prayer that have no charge. 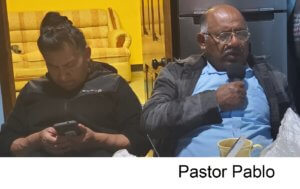 This praise service and invitation to partake in God’s best gave evidence of living in a kingdom age that is already new and getting ready to get newer and better. No one expressed the illusion that they were already in heaven or that the new earth wouldn’t be even better, but they did present a challenge to those that had been unable to withstand the shaman and the disillusionment of following dead images that never changed anything.

In about a month you will be able to hear this story yourself on 5fish.mobi under Zapoteco El Alto. This story will be heard by anyone with a cell phone anywhere in the world. The San Antonino El Alto church’s first challenge is to quietly share this story with the residents in San Pedro El Alto just a few kilometers away. There the Gospel is still shut out but a few secret believers are known to exist.

If you are interested in learning how to share links on social media that will promote use of our recordings and the Gospel in general, please contact Roland Heck@GlobalRecordings.Net