Fairly recently I came across a missionary who was honest enough to tell me why he wasn’t using our recordings.  This kind of feedback is always instructive.

He likened us to hit and run drivers.  His understanding of how we get recordings was that we show up and tell someone to translate one sentence after another and then leave the scene with a Bible story after a few hours.

I could not deny that that has never happened but I explained our current practices and rehearsed how it usually works and he changed his tune and even asked us to send him some recording technicians.

Last night I counted up how many trips we have made to the Zapateco Alto.   Without even counting the first three trips because we were on our way to the Zapoteco Elotepec and didn’t even know we were driving through a different language area.  After we got our improved language maps we realized that we had actually gotten stranded on a hairpin curve in the principal town of San Antonin Alto.  We had to pay the town government to use their backhoe to lift the van around the corner. 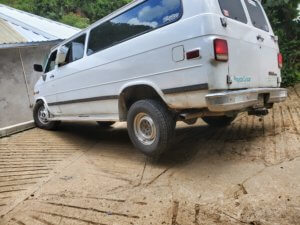 After knowing we had a valid language with close to a thousand speakers we went back to get word lists and look for believers.  We found a secret believer in San Pedro Alto who offered to translate a script.  We didn’t have a script manual so had to make a special trip back to leave that off.  Turned out that the word list we had gotten on our first visit was from the local shaman.  (I promise there will be more to that part of the story.)

Phone communication with Lulu (the secret believer) was sketchy at best so we went back (this is a three hour drive over a very high mountain range each time).  We found that Lulu had lost her mother and found that the translation was really more than she could handle.

So we made another trip to San Antonin and actually found a church.  Pastor Porfilio and his wife were actually Zapoteco speakers.  But he said he did not have time for a translation project and put us off.  I left heavyhearted and was advised to write it off.

But the Lord would not let me sleep.  A couple of weeks later I went back with Francisco who is a Zapoteco speaker from a very different language variant.  During the two weeks we had confirmed active speakers in at least three other villages.  Francisco persuaded the pastor to work with us and he promised to call us when he could give us a date.

Well, time went by and the phones weren’t working so we made another trip to get a date.  Porfilio gave us the date of December 22.  On that trip the front wheel on the van actually fell off the van — fortunately at a very low speed.

Last week we went back to honor our invitation.  We went a day early because of road blockages created by protesters in Oaxaca city.  We were in time for an evening Bible study and learned that Porfilio was actually the shadow pastor.  Turned out the actual pastor and founder of the church was normally living in Texas and happened to be there.  His name was Pablo.  When he announced us in the service he indicated that we had come to translate the Bible.

That explained a lot.  Lots of their reluctance was because they did not have time to tackle such a big project.  After the meeting we were invited to a home for supper along with the Pastor Pablo and elders and we had a good long talk.  We were in a home with Internet so we were able to play GRN recordings from 5fish for them from the two closest languages. I explained to them that although we were outsiders we could identify two groups of Zapotecos that needed the Gospel — the migrants and the elderly.

They immediately started discussing what they should record.  We did not give them a script book.  We suggested some Bible stories that would target the Zapotecos that had left the culture.  They wanted to also target the monolinguals that were isolated in their homes and were still unconverted.

They really liked the idea of using Luke 15 and the Prodigal Son. Here Jesus suggests that God loved and was looking for the Zapotecos that had left, but also those that had stayed yet still did not know God. 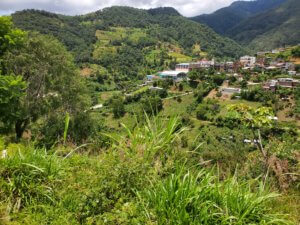 At the end of the evening they agreed to make this a church project.  They would include testimonies and prepared preaching and let us know as soon as they could do the recording — even suggesting recording outside the town in a smaller village that was much higher in the range and away from the noises of town.  It is hard to capture verticality of these mountain villages on a two dimensional photo.  A lot like Nepal or the Alps. And the noise — with houses on top of each other and donkey-wide streets, a lot of noise is the norm.

After a good sleep in a room just for us, we returned to Oaxaca, spending a complete hour on what is normally about a 20-minute walk, running through alleys to get around the blockades to get home.  I anticipate that after this, our seventh trip to the Zapoteco Alto, we will not again be accused of “hit and run!”

If you are interested in learning how to share links on social media
that will promote use of our recordings and the Gospel in general,
please contact Roland Heck@GlobalRecordings.Net