The Gospel Arrives in Zapoteco: Elotepec

It’s pretty unusual that a language goes from discovery to the audio Gospel being distributed in one month, but that is what happened for the Elotepec speakers of San Juan this August.

If you are following these blogs you know that early in August we did the pescadore routine. We were invited back to record with potential volunteers. I went with trainee Joel to record this Zapotec dialect and in the process discovered we would not be able to depend on social media for thorough distribution. We didn’t see any cell phones – not that uncommon in the subsistence economy of rural Mexico. We were able to purchase small speakers with SD card drives for about $3 each here in the city and uploaded the finished Elotepec language program plus a simple Spanish New Testament and Spanish Words of Life. The mission had recently been given 1700 SD cards of 1 gigabyte each. We had 300 of those sent down from Tucson and were ready for a distribution trip.

Marcos and I pulled into the village of San Juan de Elotepec in the public shuttle service after 5 or 6 hours of rattling over mountain roads. Unknown to us a group at the diner we had frequented for meals and wifi service was in the process of wondering if we would ever come back. One of the elder Elotepec, Demetria, was asking because she spoke the language and was really sorry she hadn’t found us when we were recording. Right then the shuttle van pulled in front of the diner and we stepped out. Everyone was amazed and they were very grateful to receive one of the speakers for the diner owner’s mother who had originally recorded the word list for us.

We were in a hurry to get to the church service in the next village of Llano Monte- about a one-hour hike over the mountain to the next valley. We were heading out and Demetria implored us to come back to her house later. She showed us where it was and we promised to find her in when we got back in the afternoon. I really think she figured she would never see us again.

We enjoyed a meaty service with the believers in Elotepec over the promise of God in Exodus 32 to never leave His people. We were warmly received and following the service broke out the players and played back the new content in the language along with the Spanish content. They were happy to receive the players as missionary tools in their own village and agreed to take them to two more villages where the language is still spoken. They quickly gave us a meal of tamales and waved us off as we attempted (unsuccessfully) to beat a rain storm that was moving in — a fringe benefit from a cyclone on Mexico’s Baja coast plus Hurricane Ina pounding the Gulf Coast of USA.

Afterwards we found Demetria’s house and were welcomed in to enjoy elote — boiled corn in the husk. We played the Elotepec for her and she told us why she was so anxious that we visit. She went into another room and came out with her very elderly mother, blind and very stooped. She only spoke Elotepec – one of the few monolinguals in the language. She grasped the little speaker and was obviously amazed to hear it speaking in her only language. Her daughter translated for us. She told the whole story of the lost sheep and Jesus’ invitation for us to come to Him. 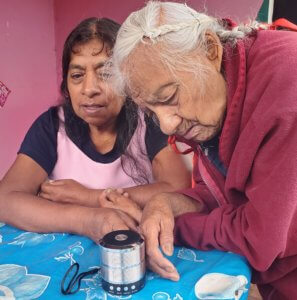 This moment reminded me of two times in this project when we nearly gave up. Once was during our very first entry into this area, when our van got stranded in the air on a corner that was way too sharp and on a very steep road. We realized it was going to take an extra day to get to San Juan de Elotepec and that we had no gear for over-nighting. The second brush with giving up was when some questioned if this whoe project was necessary because so few were monolingual and their language that was listed as moribund.

We know now that for years to come there will be hundreds of Elotepec that understand the language but don’t speak it well enough to translate. They will be grateful to hear their mother tongue and this whole project may very well bring some into the fold. Praise God He kept us —  more than once – from giving up.