I think that most of us in the Lord’s work have learned to look for and identify “Those God Things.” They are wonderful things that God does in our life, events which can be distinguished from mundane, human-enacted desires or efforts. The Bible is full of these events, often calling them “signs and wonders and miracles.”

I thought it good to show the signs and wonders that the high God hath wrought toward me. [Dan 4:2 KJV]

Like the prophet Daniel I invite you to share with me a few “God things” from a recent three-day 2,000-mile drive to Texas and back to meet four new members of the mission.

The first wonder was that Dan Rulison was glad to go with me to interview and orient new people, and that he was willing to do most of the driving.  Dan and I both love long haul drives — a tradition with us that goes back more than 40 years — but I digress. We started at 4 am, picking up Barb and Michele and dropping them off at the airport after their visit with us that included an exciting outreach in Mexico.

Our plans were to visit the Emerson family in Waco, Texas, then Steve Simpson and his wife in San Antonio, and then to swing up to San Angelo to see Robert Thorne on the way back. As we entered Texas, I started thinking it might be wiser to visit San Antonio first because Steve Simpson in San Antonio had an expected grand-baby complication that was difficult to give a precise ETD for. I was getting ready to call Steve as we breezed past a cell tower when I got a message from him that said that “Roxanne” had been delivered safely and we could come anytime we wished.  Dan and I looked at each other and said, “That was a God Thing, perfectly timed.”

The next wonder occurred as we were following our google maps, going cross country toward Waco. We suddenly realized we were near San Angelo. It was near supper time so we called Robert Thorne and offered to share a hamburger with him and spend some time together. He was happy with that. During our time I learned that he had roomed John Steinmetz in that same house years ago when they were both in the military. Robert among other things is learning software language to manage our MORPH program. Dan and I pulled out before sunset and noted that we had just shaved a day off of our planned 4 day trip — an unplanned God Thing. 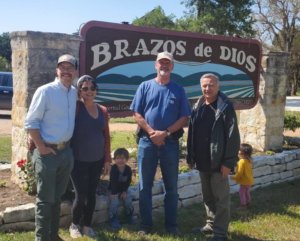 We spent the next day with Josh and EricaLiz Emerson in Waco along with their 2 ¾ children. Josh wanted us to visit and join them in a meal at a Homestead Heritage site that trains young people to use appropriate technology for community development in missions. Josh had told me about Jessica, a young girl there that was fascinated with languages. This was a big place with hundreds of visitors but guess who was the waitress at our table? It was Jessica. She impressed us with her knowledge of classical Greek and we impressed her with 6000 languages on 5fish. It was there that we realized that we need a small recruiting handout appropriate to give to other Jessicas. Josh offered to help develop that.

Pulling out of Waco we had a deep sense that God had blessed our time there with a number of signs and wonders.

Arriving at a pre arranged rendezvous point (a Panera Bread) in San Antonio the next morning we met Steve and Jonette Simpson. This was a first face to face meeting with an amazingly prepared and gifted man who, after reading a recent ALERT, has offered to remotely help us with our many high-tech needs.  Only days before I had been communicating with our International Leadership Team about a new data platform for our very large database. They indicated they had all the team in place with qualifications except for a user interface designer. Guess what Steve used to do for Boeing! Yet another God thing. Steve has a very long list of other projects that he will also be working on.

In play through all of this driving was a phenomena that was a little disconcerting. For no apparent reason the engine would shut off while we were going 80 mph. This happened at least a dozen times. We would coast nearly to a stop and then the engine would spring back to life. Never once did it completely stop. This kept us praying! When I took it to the dealer back in Tucson he diagnosed a packrat nest plus missing sensors, vent tubes, and fan belts. This veteran mechanic said, “It’s a miracle this car was running at all.” Guess what — we chalked that up as another God Thing!

P. S. As a “thank you” for your continued support of the ministry of Global Recordings Network USA, and in celebration of over 80 years of God’s faithfulness, we have compiled a collection of 80 daily devotions written by GRN founder, Joy Ridderhof. You may read or download your copy of Rejoice Always – 80 Devotions with Joy Ridderhof  here.