Of all the desert-dwelling mammals, the desert cottontail is probably the one you will see most frequently. Preyed upon by everything from snakes to coyotes to owls, most cottontails are killed within their first year. These rabbits have few defenses other than good eyesight, good hearing, and the ability to flee quickly. They compensate for heavy losses by reproducing at a prodigious rate. Female cottontails can breed at 3 months of age and have multiple litters in a year. Young stay at the nest for only about 2 weeks.

I have always taken seriously the relationship that God initiated between man and the animal kingdom in the beginning.  I set out a while ago to see if I could befriend the many desert cottontails around my trailer. They quickly picked up the rabbit pellets I put out every morning.  It took a while for them to connect that food to me.  They soon learned that when the classical music started the food was not far away.  One morning one of them actually saw me dropping the pellets there by the barrel cactus.  The next day when I went out he ran up in anticipation. That was Notch Ear.  He figured out where his provision came from. He was easily distinguishable because of a coyote sized nip out of his left ear.  He can’t weigh more than 2 pounds.

It wasn’t long before everyone else figured out the man/food connection.  They would mercilessly chase Notch away.  He had always been the last and the least. I learned that by moving closer the other rabbits would leave Notch alone.  I think Notch believed I was his friend.  He acted on that and got his provision. To this day he is the only one that seems to enjoy eating in my presence.  He sits there nibbling with his eyes half closed in peace, joy, and rest. 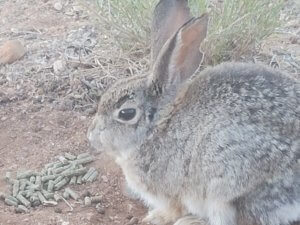 Gradually his self image improved and one day while I was watching over him he started chasing the other rabbits away.  He had turned into a possessive tyrant.  It was as if he was saying to the others, “These are my pellets and this is my man.”  (Sound like something Jonah said about the Ninevites?)

So the next lesson was to teach Notch to share.  Maybe even to help him understand that I liked all the rabbits – even the ones that came in from the west wash. (That was really pushing it!)

By moving closer and closer to me Notch learned that there was really an endless supply of those pellets – nothing to fight over.  He doesn’t know it yet but eventually he will be in my lap.  From that position he will see all those other cottontails differently.  He will also see me differently.  He might even understand for the first time in his little persecuted life that someone loves him. He will graduate from being runt to being king.  From hatred and fear to prestige and ownership.

Today he is pretty good about sharing.  Sometimes three of them are sharing that little pile of pellets.  Sometimes they step back and take turns.  Most of the time when the bigger light colored cottontails come in from the west wash there is war.  One time after the melee there was actually a lot of soft bunny down on the ground that had been pulled out.

One day during supper a hawk flew over.  Everyone instinctively ran away.  Everyone, that is, but Notch.  He ran under my feet and just looked up.  He figured out that I was not only a provider but also a place of refuge. He knew that as long as he was close to me he was not going to be touched by a hawk nor a coyote.  What a new perspective in his life.

See if you can connect these verses from Jesus.

Blessed are they that hunger and thirst for righteousness- for they shall be filled.

Come unto me all ye that labor and are heavy laden and I will give you rest.

Isn’t it significant that the first three cottontails to come to my hand to eat were the most chewed up and the smallest?

P. S. As a “thank you” for your continued support of the ministry of Global Recordings Network USA, and in celebration of over 80 years of God’s faithfulness, we have compiled a collection of 80 daily devotions written by GRN founder, Joy Ridderhof. You may read or download your copy of Rejoice Always – 80 Devotions with Joy Ridderhof  here.