Back to the Crib

It is also God’s gift to an elderly person who needs to learn another language. I have elsewhere characterized Bahasa Indonesian as the easiest language in the world to learn. After over a month of learning the basics I still maintain that opinion even though I am finding memorization a lot more challenging than when I started in Spanish over fifty years past.

Imagine a language that has no verb conjugations for ether tense or person or number. A base word is the same whether noun or verb, singular or plural, male or female, past or present. Many verbs can become nouns with a simple affix and vice versa. There is no painful orientation of language around gender. In fact instead of saying brother or sister, you say sibling.

What Indonesian seems insensitive to in gender, time, and number, they make up for by complexity in levels of honor and formality. It speaks volumes about a world view that is more fastidious about appropriate respect than it is about gender orientation. Gone are the days of needing to remember if a noun in Spanish is male or female.

Even the phonetic sounds of Indonesian are simple consonant vowel consonant sequences. None of the clumsy consonant clusters of Russian. None of the nasal, non-nasal quandaries of Portuguese.

The contrast between the vocalization and non-vocalization of consonant stops is very subtle. In fact I’ve about decided I’ll need to get a hearing aid to really interpret what I am hearing. I fluctuate between that solution and just deciding that there is free fluctuation between /b/ /p/ and /d/ /t/ and /g/ /k/ and /j/ /ch/. Listeners don’t really seem to mind until you are writing it down, and then they are quick to correct you because many of those options drastically affect the meaning of the word as written.

As with any language learning process there are many pitfalls along the way. The primary amusement for nationals living around foreigners is hearing some of their mistakes. I created some laughs that will be held against me for years to come.

I was keen to use my new language so when the housekeeper came in one morning I greeted her by saying, “Salamat pagi Istri.” Everyone laughed. They knew what I wanted to say but understood clearly what I had actually said. Her name is Isti and I had slipped in an r which changed it to wife. Perfect grammar, wrong meaning.

Language learning is a humbling process. At church a couple of weeks ago I mentioned that language learning was kind of like entering the Kingdom of Heaven. I thanked them for their patience in putting up with the three of us.

“Verily I say unto you, Whosoever shall not receive the kingdom of God as a little child shall in no wise enter therein.” [Luke 18:17 KJV]

I don’t think there is a proud way to enter a new language. The same is true of the Kingdom. If for no other reason I recommend putting yourself in a situation where you have to learn another language in order to accomplish the most basic functions of life. Suddenly you find yourself on the level of a child in a crib that can only bawl to communicate. Progressing from there to years later being able to communicate the subtleties of life and thought and intent and human emotion is not unlike the process we are going through to be transformed into the image of Christ. It is a process that involves intimate attachment to our Head, resolve, hard work, persistence, and patience. It is a process with ebbs and flows. But, it is a process that gloriously succeeds for those who hang on to the grace of God and never give up. It opens a window of understanding with another huge block of humanity and provides the opportunity to communicate “a word in season” as well as an opportunity to see God’s creation and people through eyes shaped by a worldview that is unique.

You might not be surprised that the Gospel messages on 5fish are a part of our language learning routine. I listen almost daily to the Good News for children in Bahasa Indonesian on 5fish. Believe it or not, before we ever got here and before Pastor Siswa had ever heard of Global Recordings Network, another missionary had given the church a number of mp3 players made here in Indonesia that were loaded exclusively with Global Recordings Network content. Most days we hear the entire family listening to those recordings.

Here is the little missionary that went ahead of us. 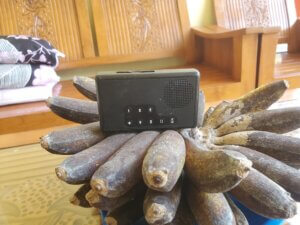 And here is the happy family that is hosting us. 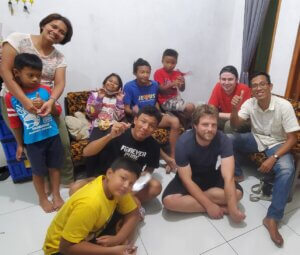