Completing my first week in this land I realized that though I had been in the most populous city of Lagos and also in Jos, capital of the highest and most central State, I had not seen a single other white face — anywhere. That certainly speaks to the successful extraction from being a British Colony in 1960. (Just a year after Alaska was freed from being a US territory.)

Evidence of colonial practices that I had observed years ago in India are noticeable. Probably the first thing I noticed was the emphatic “Sa” that concluded every greeting. Took me a while to recognize this as a very British “Sir.” Divisions of labor persist regarding gatekeepers, chauffeurs, and housekeepers, which are to be respected … as I learned when at the GRN office. I heard someone knocking on the gate and, true to practice in Mexico, I jumped up to open the gate. But I was immediately and firmly sat down told that there was a gatekeeper and I was not to infringe on his duties — even though he wasn’t there right then. 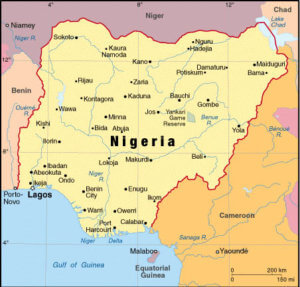 I am staying in a guest house belonging to Rhema International. We are in a “Christian” zone that is less prone to violence than where the office is. The compound is bounded by the police commissioner on one side and an ex president on the other. Though less vulnerable, the area is certainly not immune from rolling blackouts and internet interruptions. Lack of water and limited power generation from petro chemicals makes electricity a luxury everywhere in this country. This shortage makes cereal production insufficient — enough so that most people can’t afford feed for chickens or, for that matter, even dogs. Have only met one dog so far and seen few. No roosters in the morning. Instead at 4 AM we awakened by the call to prayer from a local mosque.I have not seen any cactus yet but just going by the temperatures and the arid landscape it does not appear much different from our home in Tucson. Haven’t seen any mountains yet.

Kish explained that Nigeria is divided about three ways. The North and Central are largely Hausa speaking and dominated by Muslims — many radical and fueling the civil war. I have heard a lot of talk about the ongoing civil war and losses that get pretty close to Jos and to the families of the staff of GRN. Haven’t once heard about the invasion of Ukraine.

The southern part of Nigeria is largely Yoruba Muslim and more characterized as tolerant and peaceable.

Nigeria has a large Christian community that dominates the central portion of the nation.  ECWA has about 10,000,000 members and was founded by SIM who had its genesis here. At one point this land was called the Sudan thus the Sudan Interior Mission made sense. The three original missionaries made their initial trek into the interior and Bingham was the only one of the three to survive malaria.

Gospel Recordings Nigeria was founded as a pseudo subsidiary of ECWA. The board chair is also on the board of ECWA but ironically today ECWA sees GRN as a foreign supported agency. They are sympathetic and beneficiaries to the ministry but insensitive to the need for Nigerian support of the ministry.

I met this week with most of the board and another meeting is planned before I leave. We are delicately moving toward a proposal that would accelerate completing all the languages of Nigeria.

Defining the task is not easy. Joshua has had the data in hard copy that I brought and finally yesterday told me that he will not be able to confirm a lot of the suggested information on unrecorded languages until the language areas are actually visited on the ground. (Not that different from the situation we started with in Mexico.) Unlike the situation in Mexico, the only documentation to the completed recordings in Nigeria is in the form of cassette and CD masters that cover a wall pictured in the photo along with staff members (left to right) Solomon, Kish, and Joshua.
Data is available in our GRID database but the office is not even served with internet.

Pray that between now and April 7 we will be able to get our arms, heads, and hearts around the unfinished task and God’s plan for the future.