War is to warrior just as guerra is to guerrero in Spanish. Guerrero is series of small villages and a language with the remaining speakers of what linguists speculate was once the parent language of Itundujia.

I am focusing on these people so you will pray for a breakthrough. There is so much animosity to outsiders that we have not even been able to get a word list. On our last attempt to do this, while driving through the area, an elderly man would not even stop walking. When we asked if he spoke Mixteco he abruptly said, “Goodby.”

Guerrero is only a few kilometers from Itundujia which is a county seat perched on top of the sierra at 2700 meters above sea level. We located a Christian church and missionaries in Itundujia. Several have relatives in Guerrero and a sympathetic health worker, Nila, is also helping us look for willing speakers.

In fact it was at Nila’s information that she had two willing speakers that I went out last week to get ready for action. I stayed with a Mexican missionary couple and learned that the two speakers were generally known as the town drunks and were difficult to locate. Then Nila got really sick. I spent a couple of days prayerfully waiting on the Lord and then returned by public transport to Oaxaca.

Here is what we have learned about Guerrero. Our learning began when we picked up a hitchhiker on our first trip through and he told us a lot about what he knew about the area. He was actually from Itundujia and was going out to join a new town celebrating independence. Now that makes more sense to us because we have come to know that in the scattered valleys and residences of those sierras are fourteen villages that all look like one to the outsider. Here they are:

This list of villages tells a story of its own, a story of distrust and division and probably war. We will know more later.

Central in this piece of high altitude geography is the village of Llano de la Tristesa – “Valley of Sadness.” In this valley that you can drive through in less than 20 minutes are more than 1500 people that census records reveal as majority native and about 40 percent still speak the language. 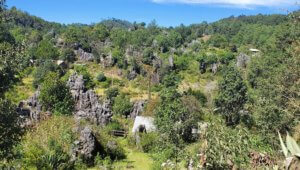 Significant geologically are the vertical stones that stand throughout the area, some towering over houses and even the pine trees. Please pray for this very unique people. We have learned of two cults that are in Guerrero. One is the Jehovah’s Witness and the other a Unitarian sect. We have yet to talk to a born-again person. I believe God is preparing someone to work with us to bring light to this dark place. Please pray as we move ahead.

If you are interested in learning how to share links on social media that will promote use of our recordings and the Gospel in general, please contact Roland Heck@GlobalRecordings.Net