It occurred to me that if the love story in the Song of Solomon is to represent Christ’s pursuit of His bride, and I believe it does, then His own ministry should provide plenty of examples of this process at work.

Indeed, when you think about it you don’t have to dig too deep to see the God/Man/King/Shepherd/Lover/Judge in full glory. Only in that perspective can you make sense of what sound like contradictory statements such as are found in the span of a few verses in Mathew 11. Jesus first says, “Woe unto you…” and then “Come unto Me.…”

In His very first public act of His ministry He opened the scroll of Isaiah and read what is recorded in Luke 4:18-22 (KJV):

18 “The Spirit of the Lord [is] upon me, because He hath anointed me to preach the gospel to the poor; He hath sent me to heal the brokenhearted, to preach deliverance to the captives, and recovering of sight to the blind, to set at liberty them that are bruised, 19 To preach the acceptable year of the Lord.” 20 And He closed the book, and He gave [it] again to the minister, and sat down. And the eyes of all them that were in the synagogue were fastened on Him. 21 And He began to say unto them, “This day is this scripture fulfilled in your ears.” 22 And all bare Him witness, and wondered at the gracious words which proceeded out of His mouth.

Jesus conveniently stopped reading the Isaiah scroll when it started on His future role as Judge.  Jesus, the lover of men for the most part, demonstrated that posture in real life as He indeed does even to this day.

When John the Baptist asked if He was the anointed one, Jesus replied, [Mat 11:4-6 KJV] 4 … “Go and show John again those things which ye do hear and see: 5 The blind receive their sight, and the lame walk, the lepers are cleansed, and the deaf hear, the dead are raised up, and the poor have the gospel preached to them. 6 And blessed is [he], whosoever shall not be offended in me.”

John’s offense, as with many Jewish leaders, was that Jesus was not acting like the Kingly judge that would destroy Rome. Rather Jesus was behaving like a lover looking for a bride. John himself and Jesus both referred directly to Jesus as the Bridegroom.

To the inquiring Nicodemus He said, “God SO loved the world that He gave His only Begotten Son…”

Consider how Jesus dealt with the woman caught in adultery. [John 8:11 KJV]  And Jesus said unto her, “Neither do I condemn thee: go, and sin no more.”

This courtship mode extended even to the Samaritan woman, where Jesus tarried more than a day. He told this thirsty soul [John 4:23, 34-35, 39-41 KJV] 23 “But the hour cometh, and now is, when the true worshippers shall worship the Father in spirit and in truth: for the Father seeketh such to worship Him.” … 34 Jesus saith unto them, “My meat is to do the will of Him that sent me, and to finish His work. 35 Say not ye, ‘There are yet four months, and [then] cometh harvest’? Behold, I say unto you, ‘Lift up your eyes, and look on the fields; for they are white already to harvest.’” … 39 And many of the Samaritans of that city believed on Him for the saying of the woman, who testified, “He told me all that ever I did.” 40 So when the Samaritans were come unto Him, they besought Him that He would tarry with them: and He abode there two days. 41 And many more believed because of His own word.”

We see the spectacular deliverance of the Gadarene from Satanic bondage.

[Mar 5:18-20 KJV] 18 “And when he was come into the ship, he that had been possessed with the devil prayed him that he might be with him. 19 Howbeit Jesus suffered him not, but saith unto him, Go home to thy friends, and tell them how great things the Lord hath done for thee, and hath had compassion on thee. 20 And he departed, and began to publish in Decapolis how great things Jesus had done for him: and all [men] did marvel.”

Notice the obvious pursuit in reverse with Jesus playing hard to get with the Syrophoenician woman.

[Mark 7:26-30 ESV] 26 Now the woman was a Gentile, a Syrophoenician by birth. And she begged him to cast the demon out of her daughter. 27 And he said to her, “Let the children be fed first, for it is not right to take the children’s bread and throw it to the dogs.” 28 But she answered him, “Yes, Lord; yet even the dogs under the table eat the children’s crumbs.” 29 And he said to her, “For this statement you may go your way; the demon has left your daughter.” 30 And she went home and found the child lying in bed and the demon gone.”

Study the interactions of Jesus with the family of Lazarus and Mary and Martha, and the passionate interactions that even involve Lazarus being raised from the dead, and ultimately the most sensuous scene where Mary publicly anoints Jesus with costly perfume. These dramas are tainted with tears, not only of Mary, but of Jesus weeping at the tomb of Lazarus. This complex story could be a book by itself but even in its barest simplicity, it displays pursuit – that of a love in full bloom.

Significantly, the successful pursuits of Jesus were disproportionately on the side of those who were not even Jewish.  Jesus was planting seeds that were meant to multiply and become the foundations of the  new church age when the Christian Jews were driven out of Jerusalem — that city over which Jesus had wept as a rejected suitor. He also pronounced a woe on the temple that three years earlier had been called, “My Father’s House,” but ultimately was referred to as, “Your house.”

What is your own love story with Jesus?  He is still seeking, calling us to “Come,” and then equipping His beloved with a yoke to walk alongside Him. He calls us to know our Lover… and with Him to expand the Kingdom.  And I say again, “What in your service and walk with God does not come out of the love relationship with Jesus, is suspect.” We will either experience His loving arms by coming or we will live under His impending “Woe.” 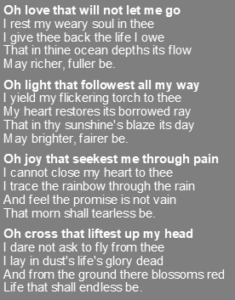