Storing the Story of Jesus

Before I joined the mission in California, I had gone to work in Global Recordings Network Australia. I worked in their archive room — which is a smaller room than ours here in the United States. It held about 8,000 recordings at the time — a mix of CDs, DVDs, reel tapes, digital audio tapes, and cassettes.

My job was to compare the inventory of recordings to their database. I’m surrounded by these recordings and it’s a small room, like a walk-in closet size. 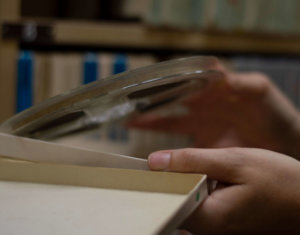 It just felt like a never-ending task. And I was alone. I remember sitting one day on the floor. I  looked up and thought to myself, “I am never going to get through this.” I was overwhelmed by how many recordings there were. I spent a lot of time talking to God, and it really felt like I heard his voice. It just hit me, like God said, “Wake up, this is the gospel and it’s in thousands of languages.”

Every single one of these recordings has a story to tell of how recordists helped spread the gospel despite those challenges. So that definitely lit a fire for me.

I was also reading the biography of our founder Joy Ridderhof at that time. I’m reading about her trips around the world, and working with reel tapes from her trips, with her name and original notes on these things. It was a huge eye-opener for me, that’s definitely where I got the passion for it.

The value of each recording

I realized the value of these, that we cannot fathom what God can do with them. You can send the recordings, you don’t need to physically go there. It’s a lot cheaper, it lasts a lot longer, and you can reach those very remote languages that you are otherwise completely unable to reach.

If only people could just catch the vision that God is so big and he cares about the least reached people groups to the point to call one lady to start a mission that is so big, so hard to understand. God didn’t even tell her how many languages in the world – she thought there was 150 languages originally. We’ve recorded over 6,400 languages and dialects. The archive room here in Temecula has 22,000 boxes of recordings in it.

So, you know, we’re human. We cannot really fathom how big our God is and what he’s capable of. We are almost an 80-year-old mission, and God is still using this mission and still using these recordings.

There so many languages and our job is not done. We need prayer warriors. There is a lot of spiritual warfare. Our recordists go through so much. We need people giving because you can’t make a recording without the money to get there to the remote area. I just wish people would get the vision. They can be doing something: they can be giving, they can be going, they can be praying. ■