As we approach our 80th anniversary one might wonder how much fruit was born of those older recordings. We have many testimonials on the life changing power of those Words of Life on old vinyl records, scratchily played on hand wound players. It is rare that a recordist can go back to a recording scene fifty years later, but that is exactly what former recordist Larry DeVilbiss did in January of 2018. 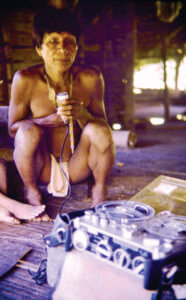 Celistino in 1968, recording the first messages even while an active shaman.

In 1968 Larry recorded eight messages in Epera Pedea: Atrato. You can hear those recordings and the former shaman and language helper Celestino telling of the months-long drama that went into making those recordings.

A mere 25 minutes of Gospel material is the seed that was sowed in that north-west corner of Colombia, the wettest place in the western hemisphere. This happened at the time when outside narco-guerilla invaders moved in and pretty much sealed off this area to the outside world for most of the fifty years that followed.

When Larry went back to this area he found a group of Epera believers that included Celestino’s son Prisiliano, who had traveled overland with Larry to Panama to invite Braulio, a converted shaman to teach. He found believers listening to those same recordings on a solar powered digital player.

Thanks to the joint efforts of Ethnos360 (New Tribes Mission) and Summer Institute of Linguistics there was a New Testament translated in a related dialect of Panama. He found a bilingual Epera reading the New Testament in both Spanish and the Panamanian dialect.

Celestino was no longer alive. Nor was Braulio, the converted shaman from Panama who had spent the rest of his life teaching the Epera. One of Braulio’s converts, a Colombian lad named Luis Sanchez who had intended to become a shaman, instead attended a New Tribes Mission Bible School and then came back to the Atrato side of the Epera territory to minister the gospel with his family.

On various rivers, Larry learned of more than twelve other communities of Epera Christians, most of whom were being discipled by Assembly of God missionaries who had moved in to help. Praise God for this wonderful and lasting fruit from less than 30 minutes of Gospel messages recorded fifty years ago!

Over 3,000 languages worldwide still do not have any Gospel recordings. It will take a small army of dedicated young people who want to move out of their comfort zones and come alongside us to reach those who are still waiting to hear the Good News in their own language. Would you like to invest today in something that will be of eternal significance now and fifty years from now? Contact us today.

Hear one of the 1968 recorded messages:

Listen below to the Celestino story . . .