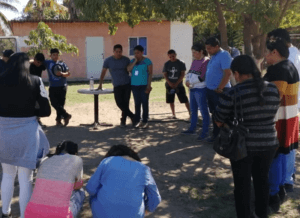 “Vamos orar!” The rich voice of Jesus Loyo (“Chucho”), the Director of GRN Mexico, roared out “Let’s pray!” at 3:00 each afternoon. It was the signal to run to the  center of the camp for the final prayers before boarding vans for the migrant camps we served during the Culiacan Project. 700,000 migrant workers harvested hundreds of miles of row crops while 300,000 children stayed behind in camps.

These camps varied widely: some were clean and neat; in others people slept on folded cardboard and shivered in crowded and filthy conditions. Mostly Indian populations with distinct languages, they literally brought their villages to us. It was a God-given opportunity to find unrecorded languages as well as distribute freely the story of Jesus in their own heart language.

Each night we set up lighting, sound equipment, mikes, musical instruments, and huge movie screens. Then songs of praise to God rang out in the Mexican way – full-on loud. More people wandered from the depths of the camps and we shared testimonies of God in our lives. When it was dark, the movies began. First Bible cartoons for the children, then a remarkable film put together by our Mexican staff, of testimonies from Mixteco, Zapotec, and other men whose lives were transformed by the power of the Lord Jesus Christ.

The Holy Spirit brought men, women, children, and whole families forward for prayer. First for salvation, then for drug addiction, alcoholism, and the myriad of problems accompanying poverty.  GRN-recorded downloads were distributed in 45 different languages throughout the two weeks.

God touched the team as well. In order to be able to serve at Culiacan, Francisco from Oaxaca had planted coffee plants, and grown, processed, and sold the coffee all year because he wanted to obey his Lord and “tell others about Jesus.” Miso made shoes to pay for his opportunity to serve.

Juan lives in the cartel-controlled area around Culiacan. He heard the worship and praise of the team and one day slipped in quietly and took a seat at the back. As he heard the teaching, the fervent singing, and joyful praise, his 17-year-old heart broke and he gave his life to the Lord. He worked hard with the team every day and at the end of our stay he gave his testimony, saying that he had never known the love of a father, but had looked for family and love in the drugs the cartel introduced him to. “Now I know the love of a Father,” he said. Juan was baptized, placed under the care of a local pastor, and introduced to his new church family.

As for the near future, an idea was proposed for the Mexico team’s consideration: that this summer 6 churches and 6 recordists divide up the remaining 36 unrecorded languages and actually go to the villages and finish the job in Oaxaca. This is the Mexican state which has the most unrecorded languages. It is a thrilling proposition as it has the possibility of being  a template for other countries. “Vamos orar!”