Our Passion: To Record Every Language

My passion is to record the story of Jesus in every language. I crisscrossed Colombia and the Amazon many times between 1966 and 1975, recording in over fifty languages. Those records were the first sound of the gospel that had been heard in most of those languages. I wanted to finish the languages of Colombia and move on to Brazil, but health issues plagued my wife Norma and me, and we returned to Alaska.

Forty years later I felt strongly that God wanted me to go back to recording. I received training in new methods and returned to Colombia to finish the task, carrying a business card that said, “Have mike will travel!”

When GRN USA called on me to be Director, I accepted with the understanding that I was still a recordist at heart and would make recording GRN’s central goal. Instead of focusing on Colombia, I could focus our mission on the world. It is amazing that in just 80 years this small mission has recorded the story of Jesus in over 6,400 languages. This happened because thousands of people like you and me have had the same passion to record the Gospel. 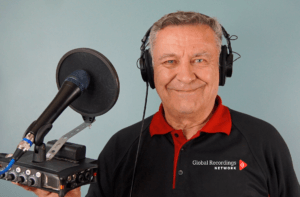 My passion is to raise a new generation of recordists and develop a strategy to record the next 3,000 languages. You can follow our progress on my web blog, The Next Language, and you can also play an important part in bringing this about.

We need young people to answer our Lord’s call to be recordists. We need people to pray for projects, country by country, to help us find recordists, and to fund their work. Will you join me in carrying out this mission?

Pray that the Lord of the harvest will send more laborers, especially recordists, into his harvest (Luke 10:2)

Read more in the 2019 Winter Edition of GR  Magazine.