Joel Juedes never saw himself going to Africa, but God had other plans.

In three years of service, he has recorded gospel messages in nine African languages in Malawi, Botswana, Zambia, and Madagascar.

“I like seeing new places and cultures,” says Joel. “Recording allows you to meet normal people in their natural home and bond with them. The speakers are often very passionate and excited about reading theBible in their own language — one man in Zambia insisted on recording until midnight.”

While editing takes time alone to do, Joel adds that, “I can edit the recording in such a way that the story comes alive, and I like imagining my listeners enjoying it and hearing the Word in their heart language for the first time. Reading takes skill, but a recording comes alive right away. Jesus
told stories to people; he didn’t hand them books.”

Travel in southern Africa is often long and adventurous. Madagascar is not far from Malawi but requires a 24-hour trip by plane via Ethiopia. Travel to remote places requires three-day bus trips over precarious roads.

Sometimes there are perks such as a stop at Victoria Falls on his way to Botswana. Local village hospitality and internet connections are now both part of a missionary’s life. “I can find helpful locals, transport, restaurants, and cell phone service almost everywhere. There have been missionaries who treated me like a special guest.”

GRN recordings help correct misunderstandings and false doctrine. New Christians may have little or none of the Bible in any form. GRN’s Look, Listen and Live set includes Bible stories from Genesis to Acts, which allows locals to understand the basics of both the Old and New Testaments. Many people have portions of the New Testament, but very few have any of the Old Testament.

Besides making recordings, Joel has found small ways to meet practical needs of the people he serves. He paid school fees for some students, helped families rebuild homes after floods, and mentored beginning African recordists who are not affiliated with GRN.

How did he get there

The future recordist was interested in missions before he heard of GRN. He had taken short and long trips to Malawi, Kenya, and Europe. God drew him back to Malawi. He could not find a mission agency which sent people to Malawi until he met Roland Heck of GRN who shared the need
for recordists.

Roland recalls, “I was excited to hear Joel tell us that he had some recording background and was interested in work in Malawi. After introducing Joel to the Director of GRN South Africa and inviting Joel to our office, it was not much longer that he took off to Africa!”

Joel wanted more than a short mission trip: “I was attracted to becoming a recordist because it seemed like an important work. Many short-term missions consist of youth who go for two weeks. I wanted to do something more substantial for God’s kingdom.” 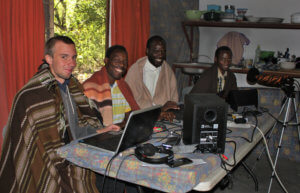 Dalene Joubert of GRN’s South Africa office, recalls, “the USA office referred Joel to me — they knew we were desperately looking for a field recordist here in southern Africa.” She gives him assignments, connects him with partners in the field, and advises on travel. “I help to pace and strategize Joel’s recording work, arrange pre-translations, am on standby during his trips, and supervise his editing work.” Dalene says, “We care for our missionaries’ needs both logistically and spiritually.” Read more about Joel’s work through GRN South Africa here.

Joel has recorded in diverse places, from a hut along the Zambia River where crocodiles threaten swimmers, to a religious retreat center in Madagascar’s capitol. Partners usually translate scripts and find the speakers and listeners who will check for mistakes during recording. Joel is seldom on his own, but adds, “It helps to learn at least a few words in the language you’re recording so you can bond with the people and follow the script.”

Recording has both joys and challenges. “It’s hard being away from home,” Joel says, “but I have  established something like a home in Malawi with Fishers Trainers Senders. I join FTS for morning devotions, and they are my friends.”

Cell phone and internet service is available in much of Africa, enabling Joel to stay in contact with family and friends. “My sisters and friends all text me on Whatsapp when I’m off on a recording trip, so I can share my travels with people in America and Africa.”

The church in which Joel was raised serves as his base of support. The church records contributions that come in for his work, helps plan a budget, and verifies that funds are used for ministry. People from the church, Joel’s friends, Bible study groups, and other churches also support Joel’s mission. “I used to attend a lot of Bible studies, so I now visit them once or twice a year and let them know how I’m doing. I also send email newsletters with photos.” As with thousands of other missionaries, Joel can confidently say, “God provides.”

The need for more recordists

About 3,200 languages are yet to be recorded, so more recordists are needed. “An adventurous person should consider becoming a recordist,” Joel says, “Anyone who likes detail-oriented computer work, but also enjoys interaction with people, and likes stories.” Recordists are one kind
of laborer God sends into His harvest.