Who Is Your Owner?

Today you will be afflicted with a recent Sunday’s sermon. I didn’t record it nor did I take notes but I know what it said because I preached it. On short notice I was asked to speak because the scheduled preacher (another Lorenzo) had to leave. I took the opportunity to demonstrate how a local story can turn into a sermon, which is exactly what our ministry is about.

The week before, we had spent time with our language helper, Antonino, who was part of a translation team and who was  rightly proud that he was one of only 5 men who could read and write the language of Mixteco de San Andres Nuxinio.

When I had first picked up Antonino he had the burro saddled and harnessed to go out to get firewood. On our return in the car I saw broken branches lying by the road and asked if we should stop and pick it up so he would have some firewood. His reply was that in this community everything has an owner. That became the opener for the sermon the next morning. Because of his skills he refused to record anything that wasn’t written first. We agreed to give him time to translate scripts and let us know when he was ready to record. We encouraged him to use local stories where possible and I promised to demonstrate how to do it in the morning service.

No servant can serve two masters: for either he will hate the one, and love the other; or else he will hold to the one, and despise the other. Ye cannot serve God and mammon. [Luk 16:13 KJV]

If everything in Mixteco country has an owner or boss it raises a very important question. Who is your owner/boss? It appears there is no neutral ground. You belong to someone. If you don’t belong to Jesus you belong to riches, or alcohol, or addictions, or ambitions away from God, or evil spirits, or Satan himself. 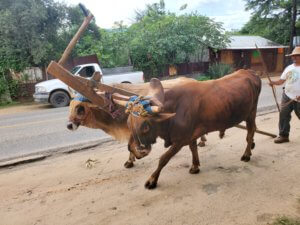 Jesus offered to solve this problem by personal invitation. He used another illustration, which is very common to the Mixteco. Oxen, controlled with a yoke, plow all of the corn and bean plantations. It is almost a daily activity because most of the fields are far too steep for modern tractors.

Here is what Jesus said:

Come unto me, all ye that labor and are heavy laden, and I will give you rest. Take my yoke upon you, and learn of me; for I am meek and lowly in heart: and ye shall find rest unto your souls. For my yoke is easy [“chrestos” – LDV], and my burden is light. [Mat 11:28-30 KJV]

Jesus is freely inviting you. Jesus wants to be your owner. He is inviting you to join Him in a yoke relationship. A yoke is always made for two. (And the Mixtecos heartily agreed to that.)

When Jesus said, “My yoke is easy,” He was actually saying the same thing that the early Church Fathers said of the carpenter shop in Nazareth where Jesus and his father made yokes. The “shingle” over the door said, “Our yokes always fit (chrestos).” Jesus is inviting you to a relationship and ministry that is made to fit you perfectly.

You know the importance of a yoke that fits. A yoke that does not fit is an instrument of torment and a source of chaos. Jesus is calling you uniquely not to “your” works but to “His.”

For we are his workmanship, created in Christ Jesus unto good works, which God hath before ordained that we should walk in them. [Eph 2:10 KJV]

Marcos and Francisco each gave closing comments and the two hour service was over. This church is quite remote on a steep hillside (as is everything). We estimate that a minimum of 50 people showed up despite the remoteness. Only one car attended the service as most walked from an hour or more away. They had a closing prayer of dedication for our mission to reach every language.

We were called back in after the service and they had put the entire offering in a plastic bag and wanted us to have it for our ministry. It was awkward because we had put a lot of the offering in the plate because we wanted to reimburse the pastor for putting us up for three days. (They had killed a couple of their own chickens for dinner the day before.) Pastor Eusibeo and his wife would have none of it and I believe their prayers will follow us for years to come.

If you are interested in learning how to share links on social media
that will promote use of our recordings and the Gospel in general,
please contact Roland Heck@GlobalRecordings.Net